TOS Review: Heirloom Audio Productions - The Dragon and the Raven

Heirloom Audio Productions sent us the The Dragon and the Raven audio drama to review this year in addition to a smorgasbord of digital bonus components. We haven't really used anything like this before so I wasn't sure what Alyssa's reaction would be once it arrived. I was looking for a product that would liven up our history curriculum. After listening to the characters discuss the audio production online, she became intrigued and interested in the historical story behind it. The Dragon and the Raven is based on the novel titled, "The Days of King Alfred" written by well-known author, G.A. Henty. This audio drama is suitable for children ages 6 and up.

The Dragon and the Raven is the perfect conglomeration of original majestic music, captivating sound effects, and  brilliant acting. This newly released Christian audio drama will undoubtedly take your family audio entertainment to the next level.

Story Summary
The story takes place during the Medieval Times ranging from AD 870-901 during the reign of King Alfred the Great and the Dane invasions. The Danish forces have invaded and attacked the English country with savage ways of war leading the Anglo-Saxons to ruin, misery, obstacles, and chaos. The story unravels through the eyes of the heroic Edmund who joins forces with and stands beside King Alfred. He trains soldiers to fight against the Danes on land and at sea aboard the Dragon. They defend their land and people in hopes to achieve freedom from oppression and recapture their kingdom.

What We Received
Product Description
Study Guide
The accompanying 49-page study guide was available in PDF format with a colored background. It included vocabulary, comprehension, research, and other enrichment activities. The disk and track number, in addition to the story section title, were found at the top of each page. There is an Introductory page that explains the study guide features and layout followed by two short informative biographical accounts about G.A. Henty and King Alfred the Great. 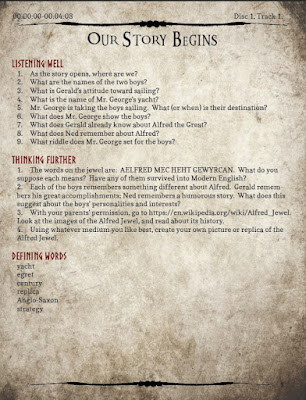 The study guide also offers and concludes with three Bible Studies complete with Biblical truths and referenced scripture verses. We didn't use this section at this time, but hope to integrate it into our studies next year. 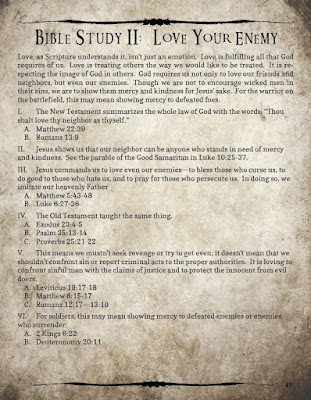 If you are curious and want to learn more about Alfred the Great, then this study guide also provides the parent with a literature list titled, "For More on Alfred the Great." We plan on visiting the library soon in hopes to find a few books about him to read aloud.

A one-page Brief History of Britain and England was included in the guide in addition to a one-page biographical account of Alfred the Great's Legacy. I read both of these aloud to Alyssa before listening to any part of the audio drama. There are promotional ads at the back of the study guide for other audio dramas sold by Heirloom Audio Productions. Give one a try . . . you won't be disappointed!

CD Set
The set of two CD's arrived in a colorful tri-fold cardboard case. The entire length of the CD set covers 2 1/2 hours of fast-paced adventures containing accurate historical content in a fictional story format. Photos of the narrating cast are on the back of the case. At the center of the tri-fold case is an inspirational referenced scripture verse for Proverbs 21:31 which is at the heart of the story.

"The horse is prepared for the day of battle, but victory belongs to the Lord.

How We Used It

CD Set
I used The Dragon and The Raven by Heirloom Audio Productions with Alyssa (Age 8) about 3-5 times throughout the week for approximately 15-30 minutes each session. We listened to the audio drama together as a family. I added the MP3 CD to our iTunes library so that we could listen to it at the computer usually after our core lessons. Several tracks were listened to at a time on the computer as a supplement to our Medieval Times History lessons.

My daughter usually sat on the bean bag creating war weapons (shield and paper sword) as she listened. I searched for King Alfred coloring pages online and also found an Anglo-Saxon Kingdom map. I asked her to color in Wessex and any locations mentioned in the audio on the map.

We also listened to this audio drama CD in the car on the way to weekly piano lessons which means we were able to hear at least 30 minutes on the way there and 30 minutes on the way back home. I would frequently use this time as second hearings. We paid close attention with hopes to catch any details we missed during the first listening session. 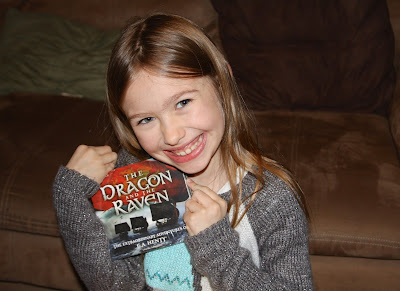 E-Study Guide
We attempted to use the e-study guide. We did NOT print it out, because there was a brown speckled background. I also kept getting an "unable to convert post script file" printing error message. I wanted to save on ink cost so it wasn't a big issue with me. However, you could always print it out on gray scale if desired. We viewed the study guide and other materials on the computer screen as we listened to the production.

We utilized the study guide several different ways before making a final decision on how to use it. In the beginning, I would pause and ask questions as we listened to the audio. A few days after doing it this way, Alyssa asked if we could set aside the study guide because she couldn't focus on the adventure in the story. We also immediately realized that not all of the details were caught during the first listening session so we eventually ended up utilizing the e-study guide afterwards while replaying several sections to find the specific answers or she answered questions after the second hearing.

The Listening Well questions were read prior to listening to the audio. My hope was that Alyssa's ears would perk up and that she would listened attentively with a purpose to the story details.

The study guide is very complete and comprehensive. In the end, I didn't worry about doing EVERYTHING. We chose a few questions to answer and will revisit the study guide when she's older. Alyssa did retain more information from the audio than I ever thought she would.

Listening Well
Alyssa verbally responded to several of the questions rather than writing the answers down, because she already has other writing intensive curricula. Some of the basic recall questions were literal while others required you to think analytically. Occasionally, I would ask her to write her responses to 1-2 questions in her literature journal after the audio.

Thinking Further
Exploratory enrichment activities were added to the study guide. Website links were provided for those who wanted to further research background information and dig deeper into the time period. For example, in the Thinking Further section one hands-on activity Alyssa enjoyed was to recreate the Alfred Jewel using any medium after researching about it online. She chose crayons as her art medium, because she wanted to keep things simple. 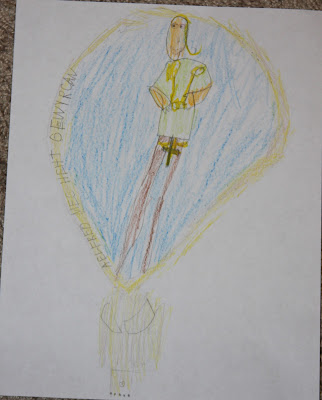 Do you know what a kenning is? I didn't until I learned about it through another activity found in the study guide. You can find it under the Thinking Further section #2 from Disc 1 Track 8. A discussion and short explanation of what a kenning was is included. Alyssa was inspired to create her own poetic kennings. She wrote four kennings about a cat and drew illustrations for each kenning. This was an extremely fun activity to complete after teaching her that Anglo-Saxons used kennings as a form of poetic writing during this time period. Several kennings were also mentioned in the "Death of Eldred" song such as "whale-road" which means the sea. 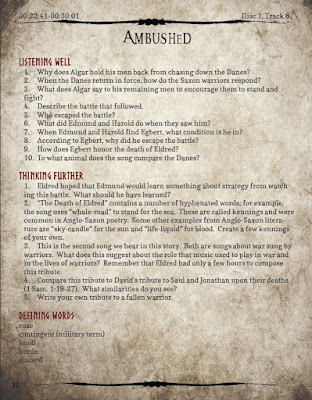 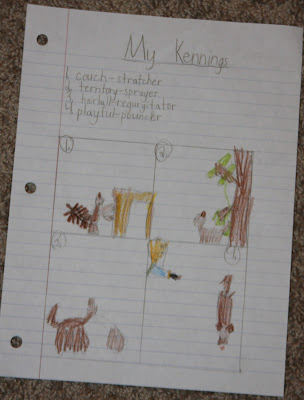 On several occasions, I gave her a Word Map Graphic Organizer for the vocabulary words. After writing the definition, she used a thesaurus to look up synonyms and antonyms. This activity really helped enrich the experience and expand her vocabulary knowledge. The vocabulary word selections chosen for the study guide were more advanced. I really appreciated it, because it challenged her and allowed her to learn something new. Some of the unfamiliar terms that were listed were Anglo-Saxon, munificent, enigmatical, prowlongboat, cloistered, and swineherd. The vocabulary word, "nauseated," was chosen from the e-study guide to discuss and map.

Soundtrack
Alyssa enjoys listening to music so the included soundtrack was a big hit with my daughter. We listened to it occasionally during our breaks, when doing chores, and even during several meals. The soundtrack was sent as an MP3 download so we cranked up the volume on our computer to hear it from the other room.

Overall Thoughts
We'd like to continue using and adding more audio theater drama presentations like The Dragon and the Raven from Heirloom Audio Productions to our homeschool day. It was an exceptionally fantastic audio drama that shares heroic adventures while emphasizing Godly character traits. I asked my daughter if she would want to listen to another audio drama by Heirloom Audio Productions again. She yelled out "OH YEAH! I really liked how they taught me history." I am currently reading aloud the e-book from the package.

Alyssa was happy when she recognized one of the voice characters, John Rhys-Davies, from the cast. She thinks his accent is super cool and always full of action. The voices and tones of the performing actors and actresses were clearly spoken and easily understood. Her favorite character was Helen George who played Freya. Alyssa said, "Her lines sounded smooth and real."

The Dragon and the Raven enabled her to use her imagination and practice visualization skills. She actively listened for longer time periods each session. The audio theater drama spiced up our lessons and brought history to life. History was definitely more engaging and fun using this product.

I highly recommend The Dragon and the Raven to Christian homeschool families with auditory learners who enjoy listening to audio drama presentations for entertainment and educational purposes. This could easily be used as a supplement when used in conjunction with a Medieval Times study or as stand alone product for a specific historical time period.

Some younger children may find certain parts of the story grotesque; my 8 year-old  daughter is very mature for her age so she didn't get grossed out by battle scenes. There was mention of a few words that may make younger children cringe or lose interest such as the word "beheadings" or "blood," but these are common war terms. Some parental discretion may be advised if using this product with younger or more immature audiences.

What We Liked
Possible Vendor Suggestions
Price
Several bundles are available in the Heirloom Audio online store ranging from $19.97 - $99.97. The Family Four-Pack bundle including all the wonderful digital downloads mentioned in this review, in addition to 4 copies of The Dragon and the Raven, would cost $99.97. Visit their store to explore the other package options and to hear audio samples.

Visit the Schoolhouse Review Crew Blog to learn more about and read the reviews for The Dragon and the Raven by Heirloom Audio Productions.

Posted by A Learning Journey at 4:23 PM