I can't tell you how pleased I was to review the recently released handwriting program called PreScripts Cursive Words and Drawing published by Classical Conversations. The company indicates that this curriculum is suitable for children within the age range of 5-10. It can be used as a stand-alone cursive writing program. Alyssa begged me for over a year to teach her cursive. She learned the manuscript letter formations years ago. The only problem was I couldn't decide on which curriculum to use until I was introduced to PreScripts by the Schoolhouse Review Crew. PreScripts implements a unique approach to cursive writing which was extremely different from all the other handwriting books I have seen. I definitely want to teach Alyssa cursive, because I believe it is still relevant. You can read Leigh Bortins' "Defense for Cursive" or Matt Bianco's "Language Arts, Spelling, Handwriting, and the Brain" explaining the relevance of cursive today.

What We Received
We received one of the four books in the cursive penmanship series. I am reviewing the second book in the series which is available in landscape format. The spiral-bound softcover consumable workbook sent had a red glossy laminate cover and contained 146 double-sided pages which were printed in black text on white paper. There is a short two-page parent introduction at the beginning of the book followed by three pages of charts titled "Forming the Cursive Letters" showing children all the letters in the alphabet (both lowercase and uppercase) at once. Children trace each letter and write it. The child is then asked to write their name in cursive. The last four pages of the book are free drawing spaces. The idea is to complete one full page per day four or five times a week which gives you access to a full academic year's worth of lessons. The complete program addressed cursive instruction in a well organized, systematic format.

Part One
First, you'll cover letter formations in alphabetical order from A-Z including both uppercase and lowercase formations in one sitting. The lesson page reveals one letter each day. After letter formations are traced and practiced, the child is introduced to a word that begins with the letter on the same page. For example, Alyssa practiced writing the word All after learning how to write the letter A. Children can write the letters four times on the 1/2" lines. Each word can be written two or three times. The final exercise on that page encourages children to trace and copy short biblical scripture references that begin with the focused letter. The scripture verses utilized in this section of the book are mainly taken from the Book of Proverbs, but also include several scriptural references from Acts, Romans, John, Psalms, Luke, Hebrews, and Corinthians. Scripture is taken from the New King James Version unless indicated differently. A step-by-step drawing lesson is offered for letters A through H. Free drawing areas appears every fourth letter starting with the letter I. Letter Z doesn't include a drawing lesson.
Part Two
The second part of the book covers numbers (including the numbers 1 through 20, 30 and 40), number word formations, and references to numerical scriptures. For example, the scripture reference for number four was taken from Matthew 24:31 and Revelation 7:1 "North, south, east, and west are the four directions." There is enough space to write the actual numbers two or three times. Number words can be written twice. Drawing lessons or free drawing spaces occur for the even numbers except for number 30. In most cases, the free drawing spaces occur every third even number. Children have the opportunity to illustrate the animals or creatures they have learned to draw on the free drawing pages.
Part Three
The last and third part of the workbook consists of lessons that introduce tricky letter combinations including sentence scriptures with letter combinations found within the references. The scripture passages were taken from the first chapter of the Book of James in the New King James Version of the Bible. There is enough space to write three tricky combinations between each tracing exercise on the line provided. Every third lesson contains a drawing activity covering more advanced techniques. After completing two specific drawing exercises, the third one is a free drawing lesson which enables the child to apply the techniques learned to the objects or shapes drawn.
How We Used the Product
The book was easily implemented in our homeschool schedule. I used PreScripts Words and Drawings with Alyssa (age 5) who has developed strong handwriting and fine motor skills. We worked on cursive penmanship for a minimum of three to four days per week for 15-30 minutes. If we worked for 30 minutes, then the time period was split with a break or different subjects were taught between sessions for the day. This means that on an average we completed three or four letters each week. Before working in the workbook, I modeled the formation on a whiteboard, magnetic board (as seen below), chalkboard, or in a sand tray. We also practiced letter formation using "air writing" and "back writing." After completing a hands-on activity, she would practice tracing and writing the letter in the book. She wrote in her BEST handwriting with a pencil. We accidentally skipped tracing exercises on several days. The scripture verses were also added to our scripture memory card system. 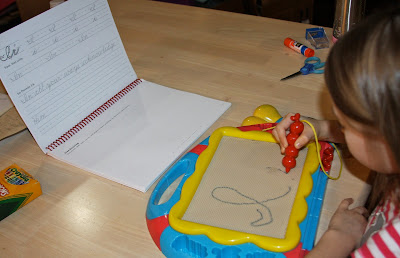 However, cursive writing proved to be a little more challenging than we expected. There were a few days she became frustrated when attempting to write sentences or became overly critical with the appearance of her letters. She wrote at a much slower pace since she was learning and being exposed to most cursive letter formations for the first time. Before beginning this curriculum, I showed her how to write several letters in cursive and she caught on quickly which is why I chose this book. After the first day, she didn't want to write the scripture sentences in cursive and I wasn't going to force her to try them until her confidence improved. She told me, "How can I write the letter l in all if I haven't learned it yet. I want to wait until I learn it." I wanted to wait until she gained confidence writing in cursive so she could be proud of her accomplishments and continue to love writing. She ended up completing one letter (half a page) a day practicing both uppercase and lowercase formations while also writing the letters within a word. The reward activity at the end of the lesson was the simple and fun drawing lessons.

What We Liked
Possible Cons
Possible Suggestions
Price
PreScripts Cursive Words and Drawing: Scripture is definitely affordable and reasonably priced when compared to any other handwriting books especially when you consider the fact that other subjects are integrated. The PreScripts four-book series can be purchased through the Classical Conversations website store under Scribblers for only $12.99. That's a great deal for a year's worth of lessons! Not to mention, you can easily stretch out the lessons to cover a longer time period if necessary. Be sure to view the sample pages on the website to see how the letters A-D are presented during your visit. Check out this video describing the PreScripts series.

Overall Thoughts
I was thoroughly impressed and enjoyed using this book with my daughter. There were times when Alyssa was challenged with the sentences in this book. However, she was still happy about learning to write in cursive. The drawing and Bible integration was a plus for our family. Furthermore, she wanted to learn how to draw and this book gave her the chance to learn drawing skills and the basic drawing elements. I usually have to search online for step-by-step drawing directions for items she wants to draw. I noticed that she was drawing many of the learned items during her free time. I also found several scrap pieces of paper in the house where she practiced writing words for her father in cursive. She focuses more on writing legibly. I am also noticing an increase in her confidence level when writing in cursive. I wish I had read the copyright policy first, because I plan on eventually having Alyssa repeat the book lessons at least twice in order to solidify the learning, practice letter formations, and commit Bible scripture to memory.

"I really like PreScripts because it teaches me cursive. I was ready to learn it. I love learning cursive and think my dad would enjoy it too. The drawings were also fun, but learning cursive was better. My favorite letter to write was the lowercase f, because it goes below the line and loops up and kicks out at the bottom."

Our plan is to purchase the first book as part of Alyssa's 2013-2014 fall writing curriculum. I believe we need to start at the very beginning of the program and slowly expose her to cursive writing. She's doing well with the second book in the series, but I would like her to have more exposure to basic letter formations before attempting words and sentences. We will continue to use this book throughout the summer until the new book arrives. My plan is to cover only one letter, number, or tricky combination each week. Alyssa will practice writing the uppercase and lowercase letter, number, or tricky combination on the first day. Then, she will review the formations, write the number word, and attempt the letter or combination in a word. I will provide additional words for practice. On the third day, she can attempt the scripture sentence writing exercises if she feels confident enough. We will limit cursive writing time to 5-15 minutes a day. I am not in a hurry to rush through lessons since she is so young. I also wanted to work on the scripture memorization verses more than once.

Recommendations
I highly, highly recommend PreScripts Words and Drawing: Scripture from Classical Conversations for any parent interested in teaching their child cursive penmanship while integrating aspects of art (drawing components) and Biblical history references into their schedule. Furthermore, this book series would be a wonderful asset to Christian private schools. This curriculum would work well for children that have strong fine motor skills and can write their manuscript (print) letters neatly with proper formation. This would also work best with a child that has some background and an adequate amount of practice time writing letters in cursive. I believe individuals implementing a Charlotte Mason or Classical method in their homeschool will be thrilled to try this book.

You can find more reviews linked up at The Schoolhouse Review Crew Blog. All levels were reviewed. If this book doesn't seem appropriate for your child, then please read the other crew reviews to hear about experiences with the rest of the books in the series.

Posted by A Learning Journey at 7:39 PM